SOUTH YARMOUTH — Jeni Wheeler beamed as she bustled around the Family Table Collaborative commercial kitchen last week adding a “bit of this and a bit of that” to her take on Portuguese stew.

The piping hot soup, which was cooked and prepared by Wheeler, along with a handful of volunteers, is chock-full of lacinato kale and shishito peppers, contributed by Chatham Bars Inn Farm in Brewster; sweet potatoes donated by Cape Cod Organic Farm in Barnstable; and white beans, culinary herbs and okra grown at Cape Abilities Farm in Dennis. Wheeler referred to the Collaborative, located at the former Riverway Lobster House in South Yarmouth, as “Cape Cod’s community kitchen,” and said local restaurants, organizations, and businesses are working together to build “a self-sustaining nonprofit working to end hunger.”

“The reason it’s the community kitchen is because it requires all parties at the table. It takes a village,” Wheeler said. “We have a mural on the wall that says, ‘everyone has a seat at our table.’ That’s not a joke. That’s what we stand for.”

From the Cape Cod Council of Churches’ Faith Family Kitchen in Hyannis to her own culinary delivery service business Jeni’s Joy, Wheeler has been the face of food insecurity-centered services before. By leveraging that experience, she is cooking roughly 1,000 prepared meals a week at the Riverway location, with distribution at a host of Cape agencies, including at the Hyannis Youth and Community Center twice a month.

The free meals have been a staple for the Collaborative since Wheeler and Harry Henry of Cape Cod Culinary Incubator launched the program in March 2020 as a rapid response to COVID-19. The duo, along with Michael Pillarella, chapter president and co-founder of the Cape Cod and the Islands Chefs Association of the American Culinary Federation, and Joseph Ellia, former executive chef at The West End in Hyannis and current culinary instructor at Upper Cape Cod Regional Technical School, the Collaborative has distributed about 90,000 prepared meals to date.

“Nobody knew what COVID held, but I knew that people would be struggling with food insecurity,” Wheeler said. “When Harry reached out and said the American Culinary Federation had all of this food from restaurants that were closing down, I said, ‘bring it to me.’ We later convened a board meeting with Michael and Joe and the Family Table Collaborative was born.”

On Nov. 14 the Collaborative held an open house at the Riverway, unveiling its new permanent shared kitchen space, but also The Commons at Riverway. The Commons is a wide-ranging effort, open to the public, which offers products from Cape businesses including Bee Boss Honey Co., Cape & Islands Tea, Cape Cod Soy Candle, and Gustare Oils & Vinegars; a café that will sell food and beverages; and a tavern with a full bar. There will also be a space for local food makers and entrepreneurs that are creating and selling products, and a community garden space with a greenhouse equipped with hydroponics. All profits under The Commons umbrella will go toward “running and sustaining collaborative efforts,” Wheeler said.

“Anything you do, whether you are renting space and holding (an) event, or you’re stopping into the café for lunch, every single thing is helping the Collaborative because all the profit rolls right back into paying for the mission,” she said.

As food distribution continues, and the makers market opens Saturday and Sunday in the first three weekends of December, Wheeler is also launching a “capital campaign” to ensure ownership of the 9,500-square-foot Riverway space, which will eventually include workforce housing.

Although the property, which is owned by Jason and Danielle Siscoe, is priced at $2 million, the coalition needs to raise $500,000 to secure a mortgage. The Siscoes are willing to loan $500,000 back to the coalition once initial funds are raised so Wheeler can cover operating capital for the Collaborative’s first year in business.

It was Wheeler’s enthusiasm and “dynamic vision,” said Jason Siscoe, that motivated the restaurateur to open its doors to the Collaborative and essentially “pivot a bit,” at the Riverway. As he works with Wheeler to secure financial backing for Riverway ownership, he said it’s “all in the spirit of working together for the town of Yarmouth.”

“Everything depends on how the banks come through with approximate sums of money but we are willing to lend whatever we can back to the Collaborative to get them over whatever financial hump there is — if that’s even necessary,” Siscoe said.

The Siscoes are the third owners of the Riverway, which opened under the Pazakis family from 1945 to 2000. Siscoe, who also owns and operates the Kalmus Beach Snack Bar in Hyannis and runs food service at Kings Grant Racquet Club in Cotuit, said Wheeler’s vision is a “good way to keep the heart of the Riverway beating.”

“There were investors that wanted to buy the space and convert it into a pharmacy or a gas station,” Siscoe said. “This is a pretty unusual endeavor and it’s nice to get behind an organization that wants to make a difference.”

In terms of fundraising, the Collaborative is already collecting donations, including $55,000 in the form of a Massachusetts Urban Agenda grant, which the organization received Nov. 18. The state grant is designed to support community economic development, grounded in collaboration and local leadership development. The award will provide a refrigerator truck that can support food distribution and delivery, which Wheeler said is “a big deal.”

“Previously, Guaranteed Fresh Produce Company was donating their trucks and drivers for our meal distributions, but now we can keep everything refrigerated when we are out on the road on our own,” Wheeler said.

Entities including Whole Foods, Cape Cod 5 and the Cape and Islands United Way have also jumped on board to help the Collaborative. Mark Skala, president of the United Way, said it’s important for organizations across the area to support the Collaborative in its mission.

“We saw there was an issue in the community, particularly during the pandemic when people didn’t have access to nutritious food and prepared meals,” Skala said. “Early on, the Collaborative identified this need and we wanted to support them so that they could grow enormously.”

Through the United Way’s annual “Best Night” event, which was held in June, Skala said the organization managed to raise $75,000 for the Collaborative “in a matter of minutes.” “If there’s ever been a project the community is literally willing and wishing to happen — it’s this one,” he said. “It’s pretty powerful to see the Collaborative in action and obviously we will continue to support Jeni and Harry because we want to see this endeavor succeed.”

Through Skala, David Ferraresi, founder and co-owner of Gustare Oils & Vinegars in Chatham, heard about Collaborative efforts and reached out during the height of COVID-19 to place excess Spanish and Italian olive oil from its exclusive importer in Pennsylvania. After speaking with Wheeler, Ferraresi said he was shocked by the number of meals that were needed on Cape Cod at that time.\

“The Collaborative was moving about 1,500 meals a week,” he said. “These meals were going to people of all ages. The single mother that could no longer work, the children that didn’t have food because they couldn’t attend school. The seniors that were scared to come out of their house. It was unbelievable.”

Ferraresi began working with Wheeler, donating pallets of olive oil and vinegar, and later helped transform the retail makers market. By watching the Collaborative team excel, he thinks the nonprofit has the potential to “solve nutritional and food insecurity in the next decade.”

“All these streams of revenue are organizationally pushing meals out the back door and feeding people who need it,” Ferraresi said. “There’s still a lot to do, but from the Family Table Collaborative standpoint, meals and nutrition are the foundation of everything. What’s better than making sure that people don’t go hungry on Cape Cod? You can’t go wrong with that.”

Sunny Fellman, of William Raveis Real Estate, began volunteering for the Collaborative in September through the Cape Cod & Islands Association of Realtors and helped with meal preparation.

“I live in the Yarmouth community and I’m proud of what is being built by the Collaborative,” Fellman said. “It’s beneficial to everybody and it’s a huge reason why it’s so successful and so many people are jumping on board.”

Giving her talent heals the cook

Despite the catchy and fervent positive outlook that Wheeler has on life, she has also had her share of hardships, including in 2017 when she suffered an accidental fall, which resulted in broken bones, nerve damage, a traumatic brain injury and a diagnosis of situational depression. At the time, Wheeler was about to launch her own commercial kitchen and because of her injuries, she lost everything. The struggle to find her footing after the accident was “incredibly difficult,” she said, and Wheeler made an attempt to take her own life. “The harder I pushed, the harder my body pushed back at me. I was in a dark place,” she said. At the onset of COVID-19, Wheeler eventually decided she could only live “with intense gratitude,” and said she would “never waste a single moment again.”

“Everyone is dealing and healing from something and I guess when I saw people suffering, I remembered that food was my thing. Food was something I could do,” she said. “That’s why, to be honest, I am blessed and deeply humbled to be the face of this organization. I make sure I show up for others. Because this whole community showed up for me. Now it’s my turn.”

READ THE FULL ARTICLES FROM THE CAPE COD TIMES – HERE 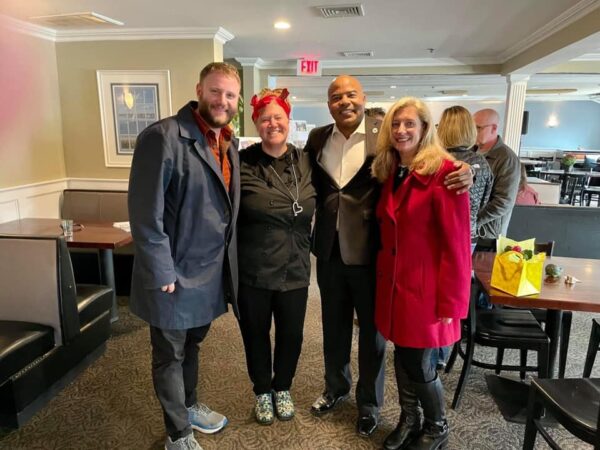