Heart on the Plate: The Family Table Collaborative

More than ever, food is bringing people together, whether that takes the form of supporting local businesses through take-out or commiserating over a failed sourdough starter. But for many, this global pandemic has caused food security issues like never before. Thankfully, a few organizations got together to help those who need it. Jeni Wheeler of the Faith Family Kitchen says “Love is always our secret ingredient, so if you need a little extra love, come see us!” When the pandemic began shutting down the Cape, Harry Henry, board president of the Cape Cod Culinary Incubator (CCCI), saw the chefs and restaurants he works with struggling to figure out what to do next. “Once the shut down started and it was evident that places would close and people would lose jobs, Jeni Wheeler from the Faith Family Kitchen in Hyannis said, ‘Hey, I’m about to see a big increase in the number of people coming to me for food,’ and she had to switch to take out. She said, ‘I’ve seen an uptick, but a whole wave is coming, and it may affect us here at the Faith Kitchen. I’m not going to be able to handle the numbers because the kitchen just isn’t big enough,’” Henry describes. “At about the same time, Michael Pillarella, chapter president at the American Culinary Federation (ACF) and executive chef at the Wianno Club in Osterville, got in touch as they were closing restaurants. Some of his chefs came to him and said, ‘We have leftover food in our coolers and freezers that we’d like to donate somewhere.’” And thus, the Family Table Collaborative was born. Combining the coordination efforts of the CCCI, the culinary expertise and kitchens of the ACF and Wheeler’s partnership with the Greater Boston Food Bank (GBFB) and mastery of veggies, the Family Table Collaborative has been handing out home cooked meals to anyone and everyone who needs it during the crisis. “It has to be a group effort. We want to make sure that people are getting a meal, and a nutritious one at that. It’s not institutionalized. These chefs are making it fresh; it’s like getting a meal at one of their restaurants,” Henry explains.

Chefs from the ACF work with the food brought in from the GBFB, as well as donated and purchased food, to create individual and family sized meals to hand out every Tuesday and Friday. “Part of what’s necessary right now is being flexible. It’s a little bit of a guessing game regarding what I’ll get; I don’t necessarily know what I’m going to get from the GBFB, who are heroes, until it arrives,” says Wheeler, “We brought in 1,000 pounds of pork loin from them at no cost, which then that meant we had to get creative with pork. But, that’s what we do.” Through Wheeler’s account with the GBFB, the Collaborative is able to hand out around 5,000 portions of food a week, as well as an additional 1,000 portions handed out at the Faith Family Kitchen. With Wheeler’s soups and meals prepared in the Cape Codder’s kitchen, the Collaborative has already handed out over 10,000 meals, or about 40,000 portions of food. For the Collaborative, it’s not about handing out just any food. In times like these, good, hearty food is more important than ever. “Obviously you want to feed people who are hungry or have some food insecurity, and when you’re hungry, any food is good food. But, we want to focus on providing nutrition because for many people, this is their meal for the day. We want to make sure it’s not just the easiest thing, but it’s the best thing for them,” explains Henry.

“The more real food we eat, the better off we are, so we’re attempting to get nutritionally dense food to people when we can. For me, the reason soup is so important is because I can hide a lot of stuff in there! I can pack a lot into soup. My chicken soup has twelve vegetables in it, and I make stew with fifteen vegetables. When I tell people, they say ‘I can’t even name twelve vegetables!” Wheeler laughs. “Before all this, people would ask to hug me all the time, and it’s the greatest feeling, but right now, that can’t happen. So, particularly with kids, being able to get through and talk to them and provide them nutrition they might not be getting through other avenues is the most important thing. Every food program that’s running right now is doing amazing work, but unfortunately a lot of it is just processed food; so by providing people with a home cooked meal they can heat at home, they’re getting additional nutritional value they might not be getting anywhere else. And ,that’s what’s important.“

While much of the country turns toward reopening efforts, Wheeler and Henry remain realistic about what that might mean. “While we’re all focused on the here and now, this doesn’t end when the restrictions lift. For many people there still won’t be a job at the end. There are long term effects for when things open back up. The challenge of money and food will be here long after the wave of publicity for charities goes away. This will have lingering effects, so we have to find a way to help people who need it,” Henry explains. Wheeler hopes that the creation of the Collaborative can serve as an example going forward. “That’s where attempting to create stable models for how we can deal with this is imperative. The conversation can’t just be around the crisis. This has just peeled back the curtain on how much of an issue there is with food security in this area, and it’s not going anywhere. We have to deal with that in a proactive, not a reactive manner,” says Wheeler.

Just as important as the food being provided is the sense of community and caring that accompanies the Collaborative wherever it goes. Whether people are picking up for themselves, for neighbors or for organizations like the Council on Aging, they know they are getting more than a meal. Wheeler reflects, “At the end of the day, I think every single person who comes to see us knows we care. And to me, that’s the most important thing. We’re not just slopping food together, we’re trying to help at a time when a lot of people need it.”

And make sure to check out the members of the Family Table Collaborative online at afcapecod.com, capeculinary.com, the Faith Family Kitchen and jenisjoy.com! 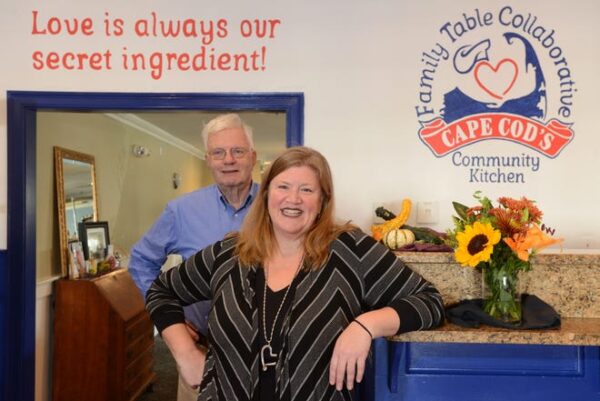